A compulsively readable and touching novel about misplaced genius and a mother and daughter’s role in an absurd world.

Bernadette Fox is notorious. To her Microsoft-guru husband, she’s a fearlessly opinionated partner; to fellow private-school mothers in Seattle, she’s a disgrace; to design mavens, she’s a revolutionary architect, and to 15-year-old Bee, she is a best friend and, simply, Mom.

Then Bernadette disappears. It began when Bee aced her report card and claimed her promised reward: a family trip to Antarctica. But Bernadette’s intensifying allergy to Seattle – and people in general – has made her so agoraphobic that a virtual assistant in India now runs her most basic errands. A trip to the end of the earth is problematic.

To find her mother, Bee compiles email messages, official documents, secret correspondence – creating a compulsively readable and touching novel about misplaced genius and a mother and daughter’s role in an absurd world.

My View: I kept hearing about how funny this book was. It was years before I finally picked it up. Was it as humorous as everyone thought it to be? Not for me. The main character, Bernadette is insane. Insanely funny? Not really.

I wouldn’t say I didn’t enjoy this book. But going by the recommendations, not as much as I should have.

I did like the characters for their eccentricity and the plot for its uniqueness. However, as the story advanced, it started losing my attention and I just wanted to get it over with. I would say the first half is interesting while the latter is so-so.

It’s okay for a one time read. It takes more to make me laugh so perhaps I am an anomaly. You may give it a try and see if it tingles your funny bone.

Maria Semple’s first novel, This One is Mine, was set in Los Angeles, where she also wrote for television shows including Arrested Development, Mad About You, and Ellen. She escaped from Los Angeles and lives with her family in Seattle, where her second novel takes place.

Goodreads Synopsis: “You’re going to feel uncomfortable in your new world for a bit. But I hope you feel a bit exhilarated too. Live boldly. Push yourself. Don’t settle. Just live well. Just live. Love, Will.”

How do you move on after losing the person you loved? How do you build a life worth living?

Louisa Clark is no longer just an ordinary girl living an ordinary life. After the transformative six months spent with Will Traynor, she is struggling without him. When an extraordinary accident forces Lou to return home to her family, she can’t help but feel she’s right back where she started.

Her body heals, but Lou herself knows that she needs to be kick-started back to life. Which is how she ends up in a church basement with the members of the Moving On support group, who share insights, laughter, frustrations, and terrible cookies. They will also lead her to the strong, capable Sam Fielding—the paramedic, whose business is life and death, and the one man who might be able to understand her. Then a figure from Will’s past appears and hijacks all her plans, propelling her into a very different future…

For Lou Clark, life after Will Traynor means learning to fall in love again, with all the risks that brings. But here Jojo Moyes gives us two families, as real as our own, whose joys and sorrows will touch you deeply, and where both changes and surprises await.

My View: Me before you broke my heart. And I wanted to repair it somehow. When I read the reviews of this one, they weren’t very promising but I needed something to fill that gap in my heart and immediately decided to listen to this on audio. Best decision ever!

Of course, there is no Will in here and that is sad. But the turn this book takes left me gaping. Very ingenious of Moyes to say the least. This book was so addictive. I wanted to listen to it all day long. No wonder I finished the 10-hour audiobook in 3 weekdays!

I am not sure if it was the medium but I found myself much more invested in this book even more than I was in Me before you. And I cried, twice, in this book and not once in Me before you. Yeah, how could I not cry about that! I know, I know. I just didn’t. I have a feeling it was a job well done on the part of the narrator, Anna Acton. She was marvellous. I couldn’t listen at my usual 1.5 speed because British accent is difficult for me to grasp at normal speed let alone the faster one. So I went slow with it but perhaps that is why I could feel and be one with all the emotions Lou was undergoing.

Yes, there are twists and turns in here which will sometime frustrate you and it does seem like a really long book but nevertheless, it was worth it. I know many people have been criticizing Moyes for writing this one and wanted it to end with Me before you but I am one of those that disagree. I think despite it being a series, we should look at each book on its own merit. To be frank, I liked this one more than the first one!

Just keep an open mind and you will love it. Don’t go comparing it to Me before you. Get to know Lou a bit better, understand her changed life circumstances, empathize with her and let her take you over completely. 🙂

Oh, and my advice, go for the audiobook.

Jojo Moyes is a British novelist.

Moyes studied at Royal Holloway, University of London. She won a bursary financed by The Independent newspaper to study journalism at City University and subsequently worked for The Independent for 10 years. In 2001 she became a full time novelist.

She is married to journalist Charles Arthur and has three children. 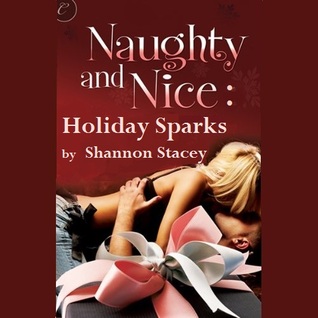 Goodreads Synopsis: A short story from Naughty and Nice: A Holiday Romance Collection

House-sitting for her parents seemed like a good idea, until the microwave blew up and the lights went out.

Now Chloe Burke thinks upgrading the electrical system of her childhood home while they are away would make the perfect Christmas gift. Fortunately, there’s an electrician in town who can get the job done by the holidays.

Scott Quinn has wanted to get his hands on the Burkes’ wiring for almost as long as he’s wanted to get his hands on their daughter. Chloe didn’t notice Scott back in high school, but she’s noticing him now, and soon they’re indulging in a little festive fun: no strings, no expectations. After all, Chloe plans to get out of this goldfish bowl of a town and back to her real life in Boston by New Year’s.

But Chloe and Scott discover they enjoy each other’s company just as much out of bed. Could their holiday fling turn out to be the real thing?

Buy it here –  Amazon US

My View:  I listened to this free little audiobook during the Ho-Ho-Ho Read-A-Thon. Spanning about an hour, it’s quite short. I do love myself a good edited book instead of one that goes on and on with no end in sight.

The book makes for a cute little, Christmas-y romantic read. It has a decent plot (albeit, not very innovative) and two relatable characters. The holiday, romantic feeling is what I liked the most.

The narrator does a good job of making the book sound interesting. The emotional tones are nicely brought about.

But I may have a bit of a problem with romantic short stories. I do not like insta-love. In a short story, you can’t go on building the love. So there lies my problem.

Also, physical intimacy or sex stepping in too soon and on multiple instances just puts me off at times. What is wrong with love expressed through words and some cherished cuddle moments, I wonder. Well, perhaps I am too old-fashioned at times. *snort*

If you are looking for a short, smoky holiday read, you may want to give it a try.

Goodreads Synopsis: After losing her husband and daughter in an auto accident, 42-year-old Emma flies to Paris, discovers she has a twin brother whose existence she had not known about, and learns that her birth parents weren’t the Americans who raised her, but a White Russian film star of the 1920s and a French Stalinist.

A story about identity and the shaping function of art, My Life as a Silent Movie presents a vividly rendered world and poses provocative questions on the relationship of art to life.

| The Book Depository | Add on Goodreads

My View:  When I saw this audiobook up for review, there was something that appealed to me about this book (if you know me well, you know I don’t read book blurbs, so all my good books are usually either by fluke or recommendations). Well, it certainly could have been that Eiffel Tower on the cover (Side note: I love travelling and I am in love with the idea of Paris, still to visit though).

Okay, let me warn you upfront, this audiobook is almost 10 hours long. I know some are like 40 hours long but since I prefer short audios, this was huge for me. But wait, did I feel all 10 hours of it? Nope, not at all. And why would that be? Perhaps because the book pulled me in from the very first word and did not let go. The narration is good enough. But the major meat is the book! Just wow!

First, the author draws a background and you are interested in what’s going on. Mmm hmm… And then there comes the twists and the turns. And Paris! And the walks around Paris. Surprise upon surprise. I was totally overwhelmed (happily!) by the plot, the unraveling of it, the characters who I found myself rooting for. Giggling at times, wanting him to be @%^&$ alive! Woah, a gamut of emotions, all in one book.

There’s some history in there. Something I don’t really like but when you dish it out in a book, I’m all for it. A woman taking a trip across the world to unravel her past – now there’s some magic in that, right? History, art, travel, mystery, a solid plot, a good narration and there you have it, a brilliant book.

A must listen I would say.